And His Face did Shine as the Sun

Let me begin with a bit of a warning on this one. Well, two warnings actually. First, this is a reflection on something I know very little about and second, these are generally unfinished thoughts. As a result I am really craving responses to this post; both from those of you who know a good deal more about the topic than I do and from those of you who haven’t even heard of this way of thinking before. Am I going off the deep end? Have I even begun to understand the things I’m talking about? What would be a good next step to take?

About three years ago I watched a video at my pastor’s house. It had this guy talking about two ways of thinking about the spiritual life. He called them “bounded set” and “centered set” models. As I understand it, these models began as mathematical models (where as far as I know they still serve some great mathematical function) but someone (I’m still trying to track down who) worked out how to apply them as spiritual worldviews. (Update - According to Steven Hamilton, the model was developed as a theological/missiological outlook by Paul Hiebert at Fuller and then got into the vineyard movement through John Wimber)

I completely ripped this illustration off of  Dave Schmelzer's "Not the Religious Type" Blog. An excellent read and well worth visiting

So if I understand correctly, the bounded set spiritual model views all people as divided into two camps (sets), in or out; and usually a person’s position in this model is determined by whether or not they have a sort of mental assent to some series of propositions. In usually means that the person will go to heaven some day and out means that they won’t.  The centered set approach denies the in/out distinction in favor of orientation. The important question in this model is whether or not a person is oriented towards the center (in my circles this means oriented towards Jesus). In my experience centered set people actually get a little confused when you ask them who is going to heaven; not because they want to dodge the issue but because the question is not the point  (they usually answer by pointing out that Jesus loves people and that loving Jesus is the point in life and well, it seems like people who love Jesus will probably be with Him forever and that sounds like heaven so…). In this model it is not so important to get people to cross lines and form new mental assent lists as it is to get people to notice and love Jesus, to orient their lives towards Him.

O.K. So I really like the centered set approach, at least I like it so far as I have understood it. I would have to say that as recently as 5/6 years ago I definitely had a bounded set worldview and that I am still trying to replace it with a centered set worldview in all parts of my life. That project is actually really difficult though, I find the old outlook always popping up in places I never thought to look for it.

And that was an enormous preamble but I think I needed it to set the stage for my recent thoughts about the centered set model.

One thing that strikes me about centered set thinking is that the center is really bright. Mathematically a center is a point.  And I think that that is appropriate. We believe in the God who is. The God who is more real than anything else, He is That from which reality is derived. He is personal and is a particular, so it makes sense that He would be represented by a point in this model.

But He is also very bright. 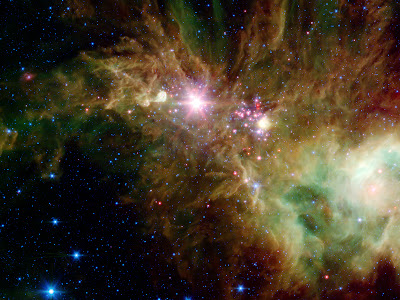 In my experience it is generally quite difficult to pick out the exact center of a dazzling light. And if Jesus is the Divine Light, so powerful and overwhelming  that looking directly at Him in even His full physical glory (to say nothing of the radiance of His full Being) generally causes people to fall down “as dead men” I imagine that picking out the exact center of His radiance is going to be decidedly difficult.

In terms of centered set modality, I think this means that as we draw nearer and nearer to Jesus we are going to have to be ever correcting. I suspect that we are going to be forever mis-identifying the center. I don’t think that it is especially hard at the outset to move in the right direction; the light is very bright and not too difficult to differentiate from darkness. In fact His light is so bright that I often find it shining into “other” philosophies, religions and “ways”, and many people have begun by seeing His light in those places, it is what gives them their spiritual attraction and glory.

So if we start out moving towards the light, we may be able to stay on our initial trajectory for some time, always pointing towards Jesus. But after a time, as our “eyes” begin to adjust to glory, as we begin to experience Him, we will generally find ourselves making corrections. What looked like it might have been the center keeps turning out to have been a little off course. And so we make a shift, in relational terms as we get to know Him better  (tanimak) we begin to know Him more fully (bilmek).  I think this explains the multitude of religions (far from the center) of churches and denominations (nearer the center) and of the variety of personal beliefs among the great saints and mystics who come so very close to God in this life. I think that it is what C.S. Lewis was describing when he talked about myth in the Perelandrea as "gleams of celestial beauty falling on a jungle of imbecility" or when the young Calormen recognized Aslan as the light he had been seeking under another name. This may also be why Jesus prayed so fervently “that they may be one, Father as You and I are one”.

Nearer to the center we are closer together; there is unity; even if we arrive from different directions.
Posted by Bill at 9:47 PM

Bill
I teach world history and philosophy, try to think hard and to Love God harder.

In addition to writing about whatever comes to mind I am also an author. You can find my books on Amazon HERE or through my publisher at Clickworks Press.